Let´s start by saying the following: Doing music is fun. Trying to get your name out there ain´t. You can get stuck in the weekly hassle to send out tracks to everybody, not hearing back from some of them while others will claim interest but forget you during their busy schedule. But sometimes, and those are the moments you´ll always remember, it all works out just perfectly due to lucky coincidences and – excuse me for using that old phrase – being at the right place at the right time.

It was in May 2011 when I was talking to a friend from Australia about my current collaborations with US artists like Kool G Rap, Sean Price, Torae, Rasco, Large Pro etc. for my forthcoming album when I suddenly asked him about dope artists from Australia to check out. He stated a few names which I looked up on youtube afterwards. When I looked up Trem, I found the video to his single „Omega Man“.

Wow. I was amazed. Even though the Aussie-Accent sounded funny at first, I got used to it and loved it at the end of my 2-hour-Omega-Man-on-repeat-marathon. That was the man! I knew that whatever Trem and me would end up working on would be nothing but fire.

I wrote a message to Trem on Facebook introducing myself and asking him if he´d interested in hearing some beats. To my surprise, Trem was quite familiar with my works:

Yo Maze…
Thankyou for the kind words!
Im definately familiar with your name and some of your work, great to hear you makin moves with some of the nicest outta NY!
For the record that This Is my Hood Remix is crazy!

btw: if you don´t know what „This Is My Hood Remix“ he is talking about, you can check it out right here:

Trem told me that he was in the last steps of finishing his album and that there was only one track left he´d have to find the perfect beat for. Two days later I sent a batch of about 25 beats to Trem; a mix of everything – rugged street shit, deep shit, boom bap joints, you get it.

It didn´t take long until I heard back from Trem. Out of those 25 beats there was one joint he particularly liked, a beat called „Firm“. Let me tell you: I totally forgot about that beat. Not because I didn´t like it – as a matter of fact I always loved that joint – but due to its uncommon sound. It was some real lo-fi and dirty shit.
I remember how I made that beat. I sampled an old french record I found in a small second hand record shop in Augsburg two years earlier and built drums around it. Given the dirty sound of the sample and the dust from the record you could hear crackling, I knew the drums had to be dirty and snappy as well. At the end I also put a vocal sample from the same record on top of it. I always do underground beats – but this one was really special, really dirty so I didn´t expect somebody to dig it that much.

Trem recorded a test recording and loved it. So did I. At this moment we both knew that this was the missing piece to the puzzle he had been looking for. While Trem had the song recorded, arranged, mixed and mastered I searched the internet to find out more about Trem. I googled the name for his upcoming album and found postings on Australian HipHop-forums like „I´ve been waiting for this Album for ten years“ and „This is the most important Album for Australian HipHop“. I knew that Trem has been around for a long time – but I had no clue about how legendary his status was in Australia. Let me give you an example: Trem released a 12″ entitled „Sheer Talent“ in 1998 which sold out quickly. Nowadays people pay up to more than 700 Dollars for a copy on ebay.

Well, so I would end up having a placement on a pretty respected artist´s album. No big deal since music for me ain´t about names and fame. It´s about quality. But when I received a parcel from Trem including the CDs for his album, I was blown away. It was one of the best rap albums I´ve heard for years. It had everything it takes: dope lyrics, nice flows, beats that deliver the flavor of the mid ´90s. Now I was happy! To get an idea about the album, check the video to „Animal Kingdom“ which was produced by that good dude Beat Butcha:

The album was received more than well and I got shown love for „Hard Yards“ from all over the world. Many people would state „Hard Yards“ as one of their favorites off the album on forums and Trem´s Facebook page and I received many personal messages on Facebook from Australian heads giving me props for my placement.

A few weeks after the CD release, Trem released a limited tape version of the album. To show back some love, I sent Trem a bunch of copies of my This Is My Hood Remix 7″ which some lucky customers would get on top of their order for free.

Things went crazy when the limited vinyl pressing (500 copies only) became available for pre-order on 09/21/2012. After the online shop´s server crashed for more than 2hrs, 500 copies sold out within 90 seconds. One week later, the first copy on ebay was sold for more than 500 USD.

So, what began with a simple request for interesting artists to a friend from Australia somehow happened to end with a placement on one of – if not the – most anticipated rap albums ever.
„Hard Yards“ is one of my favorites to this day – and who knows what the future will bring. More music from Trem and me? Visuals for „Hard Yards“? We´ll find out…

Oh, and in case you´ve read to this point without knowing what song I´ve been talking about all the time, there you go: 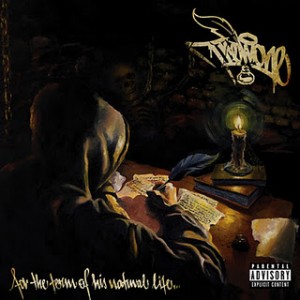 You can check out and buy Trem´s „For The Term Of His Natural Life“ album here!

[…] readers out there who´ve read the first episode of Stories behind Beats: yeah, that´s the song Trem gave me props for when we first […]